Grand Slam tennis tournament ? US Open. The third round is about to start! 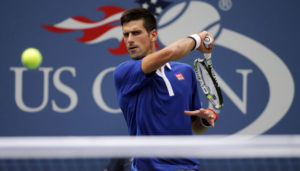 Grand Slam tennis tournament ? US Open is in the third round stage. We have already had some unexpected results, both in the men?s as well as in the women?s event. When it comes to the women?s competition, number three seed, Spanish Garbine Muguruza has rapidly lost her chance to win another Grand Slam trophy after having been defeated in straight sets by Latvian player Anastasija Sevastova. In the third round we will see however a world ranking leader, American Serena Williams, who will face now Swedish Johanna Larsson.

In the third round, there will be also playing Polish best tennis player, number 4 seed, Agnieszka Radwańska who is going to compete with French Caroline Garcia.

Another great player to compete in this stage of the US Open is German Angelique Kerber. Number two seed will face a teenage player from the United States ? Catherine Bellis.

In the men?s event, we have had so far one, very surprising score: number five seed, Canadian Milos Raonic has lost to young American Ryan Harrison.

In the third round however, we will have a chance to see many other, exceptional players, including number one seed, world ranking leader Serbian Novak Djokovic, who will be playing now with Russian Mikhail Youzhny.

Number three, Suisse Stanislas Wawrinka is about to play against Daniel Evans from Great Britain.

Playing in the US Open with number four, Spanish Rafael Nadal will compete with Russian Andrey Kuznetsov.

Bet365 has prepared many offers for the third round women?s and men?s matches of this tournament. The selected ones are presented underneath.

Our type: Williams? victory in straight sets ? odds 1.20. American player is so strong, that she should handle with Swedish, by winning in two sets.

Our type: Djokovic?s win 3:0 ? odds 1.44. Serbian player should win in straight sets. He is more fresh than his rival as he did not have to compete in the second round due to his opponent Jiri Vesely?s withdrawal from the tournament.

Our type: Murray?s victory in three sets  ? odds 1.18.  Murray is simply too strong for an Italian player. He should not lose any set.

We encourage you to follow and watch all these very interesting matches of the last Grand Slam tournament this year and place your bets on these games.