Following the conclusion to the Premier League season the focus is now turning to the showpiece game of the English football calendar, the FA Cup final. This year’s final takes place at Wembley on Saturday at 5:15pm, where last season’s beaten finalists Chelsea take on 2016 winners Manchester United.

Both managers will be desperate to finish the season with silverware; speculation has been rife throughout the campaign that Antonio Conte will be parting ways with the Blues this summer and lifting the trophy would go some way toward limiting the damage to his reputation, whilst opposite number Jose Mourinho is up against his old club and keen to justify the huge spending by United this season, having failed to mount any serious title challenge or produce a good run in the Champions League.

It’s hard to call a winner in this one, with bet365 pricing up United as slight favourites to lift the trophy at 4/5 (1.80) and Chelsea 19/20 (1.95). With that in mind the 5/1 (6.00) for the game to be decided in Extra Time will be sure to have plenty of appeal to those betting on the game. As you’d expect bet365 are offering a whole host of markets already, with some of the key ones shown in the screenshot below. 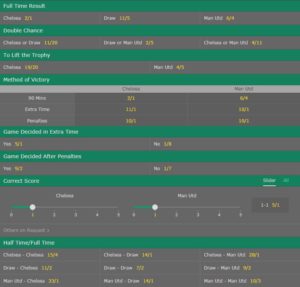